In a world dominated by expectation and technical novelties our appearance can be easily neglected. Learning how to accoutre oneself, in spite of the fickle finger of fashion, is a most important lesson. While driving my 14 year old son, George, to school this morning I relayed a story to him about my youngest experience on first impressions. As is usually the situation at 7.40 am on a week day morning George was endeavouring to put his seat belt on, drink his coffee, brush his hair and do his shoe laces simultaneously.

I don’t know what brought this experience back into my mind ( I was listening intently to the Today programme ), but I recalled a situation I found myself in when I must have been in my early 20’s. This has stuck with me and I often think about the effect it had on me.

It was during one of my weekend visits to my grandmother in Fernham. A small village a few miles from Farringdon in Oxfordshire. I had driven from London on a Friday afternoon to spend the weekend with her. On the Saturday morning I decided to go and see the Hunt off at a local Manor House near to Farringdon. I can’t think why my grandmother didn’t come with me, but possibly she had something else to do. She was heavily involved with the local art society, W.I., and the village church.

My grandmother gave me directions on where to go and I set off to get to the 10.45 am Meet in good time. I must explain, at this point, that I was   not really known in the area and had only attended a Meet with my grandmother a couple of times before when at the local farmhouse in her village.

As was usual when visiting my grandmother I would always make an effort to look well groomed. She would often make complimentary comments which I would find flattering and more importantly encouraging.

So there I was on a frosty Saturday morning in December driving to the Meet caparisoned in a Huntsman tweed jacket ( fortunate charity shop find ) a shirt and tie, and cords, as far as I remember. My brown Tricker brogues too; polished to a mirror finish on the toe caps.

On arriving at the entrance gates to the Manor House I must confess I was a little anxious. By myself, I don’t know anyone here. Will they let me in? I was thinking.

There were several cars ahead of me being stopped at the entrance gates. I could see a very official looking  gentleman directing cars to either the left into a field or to the right which lead down the drive towards the main house. All of the cars were directed into the field whereabouts they had directions by attendants to park in neat parallel rows.

As I approached the ex military looking gentleman I opened my window expecting to receive instructions to turn left into the field. Or worse be asked what on earth I was doing here! To my utter surprise he touched his cap and said ‘ good morning Sir. Straight down to the main house please. You may park on the forecourt.’ Well, I should just mention at this juncture that I was driving my first Range Rover which undoubtedly helped with the preferential parking arrangements I encountered.

After driving very carefully down this long tree lined gravel drive ( not wanting to disrupt the raked gravel too much ) I was greeted by a parking functionary who allocated me a space outside the Manor House. I was now feeling most awkward. May be they think I am someone else? What do I do if someone approaches me and says  ‘good to see you again Henry’?

It was too late now. There was no turning back.  I was very kindly ushered towards the main entrance portico and into the front hall. There was a clutch of elderly ladies huddled over a central drum table plating-up their contributions of homemade pre-sliced fruit cake in preparation to hand around to the mounted guests and associated participants.

I was very kindly invited to sample their culinary delights and comment on each one.  All of the ladies were charming and most proud of their achievements. Deservedly so too.

Through a pair of open double doors of the front hall I could see a room with another set of external doors opening onto a lawn where a few guests had gathered. On the other side of the ha-ha the mounted field were assembling. I walked through what appeared to be the library, with two lurchers in front of an open fire, and out onto the terrace and formal lawns. Within seconds I was offered a glass of sloe gin served from a silver salver from a hunt servant and a Kit Kat from a young girl carrying them around in a wicker basket. Yes, just after all the fruit cake!

By the time I had taken a sip of sloe gin from the glass in my right hand and looked at the possibility of unwrapping a Kit Kat held in my left hand I was approached by a lady who I understood later to be the hostess. She was most friendly and welcoming. We chatted for a while about the hounds ( pronounced Heinz ) and how her husband had recently suffered a serious fall taking a hedge the previous month.

After mingling and chatting with the invited guests I located some steps down from the terrace lawn to the paddock where hounds were getting excited in anticipation for the off. I wandered around and exchanged a few pleasantries with the some of the foot followers for a few minutes. There was a considerable field of 60 plus all well turned out as the Vale of the White Horse were. While dodging a few agitated horses with struggling inexperienced mounts I returned to the terrace above the ha-ha.

The Huntsman blew his horn for the off. Hounds following as he trotted away down a lane by some barns. The eager field waited for their acknowledgement to proceed from the Master. After a few minutes the Master lead the field away. At walk and then a trot down the lane where the Huntsman and hounds had previously gone.

I thanked the hostess for her kind hospitality and bid farewell to the various attendants and helpers.

Driving back down the long tree lined avenue towards the entrance gates I thought to myself how first impressions do count. While I accept the car I was driving would have had the initial impact on the ex-military looking gentleman, I do believe my attire and manner, had caused him to direct me to the main house. Thereafter too, there was never any suggestion made to me  by anyone that I may have been ‘in the wrong place’. An unintended gate crasher.

While re-telling this story to George I could see that he thought I was suggesting that he should wear tweeds with brogues which was not the case. Merely to uphold the highest of manners at all times and carve out his own style and to be comfortably positive with this. Style is an internal attribute. Something that defines our sense of who we are. Against fashion which has an external influence. Style remains the same while fashion responds to outward factors.

He opened the car door now we had arrived at  school. He grabbed his bags and said ‘see you later’. I wished him a good day and pulled away.

I hoped George would think on what I had just told him during our 20 minute drive over the Cranborne Chase. If  not now, then in the next few years as a teenager. In essence to mesh good manners with his own style in preparation for adulthood. 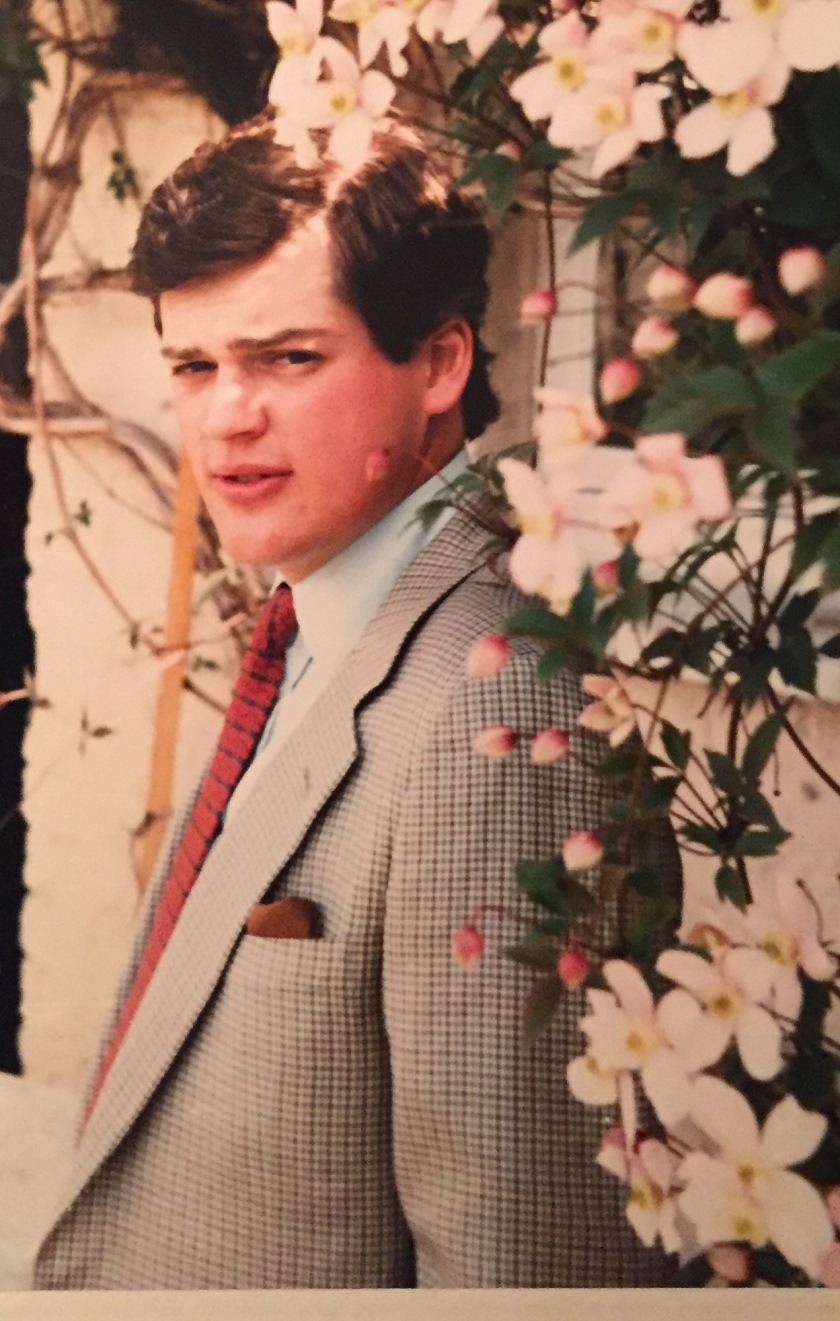 Gentlemen's vintage style blogger. Specialising in the procurement of sartorial excellence from the past. My collection consists of, predominantly, bespoke vintage Savile Row clothing, hats and St. James' bespoke shoes. It is my intention to share my collection through this blog. To give ideas & comment on putting outfits together. With thought to fabric weight, texture and colour. View all posts by vintagedresserbyfarrant